The webside presents only exemplary solutions of the container stations.
Thanks to many years of experience and a team of qualified engineers, we are able to prepare solutions corresponding to the needs of the most demanding clients. The best example is in the deliveries for contractors such as: PGE, TAURON, ENERGA, ENEA, RWE, PKP Energetyka, KGHM, KWB Bełchatów, ČEZ, EON, RWE, Alstom and many more.

Localization of the station due to fire safety requirements

The mounting area of the station should be chosen in accordance with the regulation of the Minister of Infrastructure of 12 April 2002, with regard to the technical requirements of buildings localization (Journal of Laws of 15 June 2002, No 75, item 690, with later changes) or local regulations.
Individual cases of localization/placing of the station should be considered on an individual basis and consulted with ZPUE S.A. or with other authorized services (opinion given by fire protection officer).

Internal and external walls are covered with decorative white acrylic plaster. All metal elements installed outside the station are made from powder-coated aluminium according to the RAL color palette. Colouristics as well as elevation type are offered in the standard version (table below). It is also possible to design the station according to individual architectural requirements, taking into account all available materials to finish the concrete and metal surfaces (door, louvres), roofing slopes, and roof flashings.

Notice:
The colors shown in the table may differ from those in reality! When selecting colors should always be compared with the original template colors.

Trench excavation is the first step in placing the station. External grounding of the station should be made in the trench. It is recom-mended that it should be made in the form of a grounding outer ring or other method, in accordance with local requirements in terms of grounding electrical power devices.
Under the foundation, sand and gravel ballast should be used and be at least 20 cm in final thickness (after compacting). The thickness of the sand and gravel base must be adapted to local soil-water conditions and the frost zone. The sand and gravel ballast area must be leveled for the station, and the quality of grounding prepared should be confirmed by the certificate of final acceptance.
In the prepared place, the following should be mounted successively: the foundation of the station, transformer (from the top of the station, setting it on rails), and finally the roof. Cover the foundation gradually with a concentrated 20cm layer of filter ground. Particular attention should be paid while covering the trench near the foundation’s wall to not damage the waterproofing of the vertical surfaces. The place where the cables enter to the glands should be carefully covered, because mechanical compacting can cause damage to these elements.
The foundation’s walls with the insulation against the moisture should extend no less than 10 cm above the finished area.
Placing on difficult and complicated ground and water conditions, and in mining and post-mining areas should be performed after drawing up of an individual project. It should be done by an authorized engineering- geological designer, under qualified construc-tion supervision.

EXAMPLE PLACING OF THE STATION 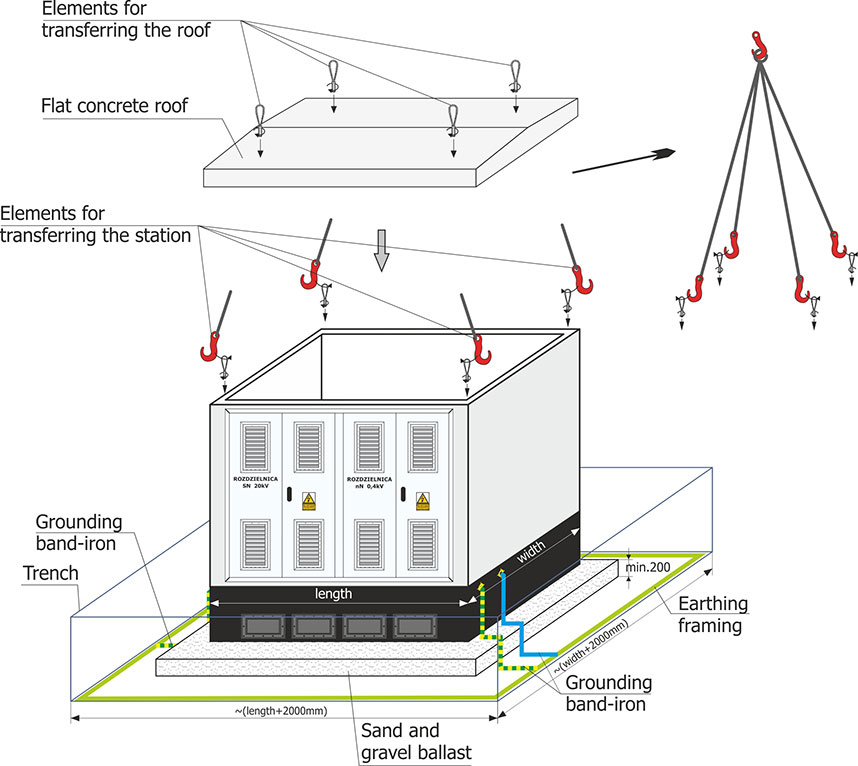